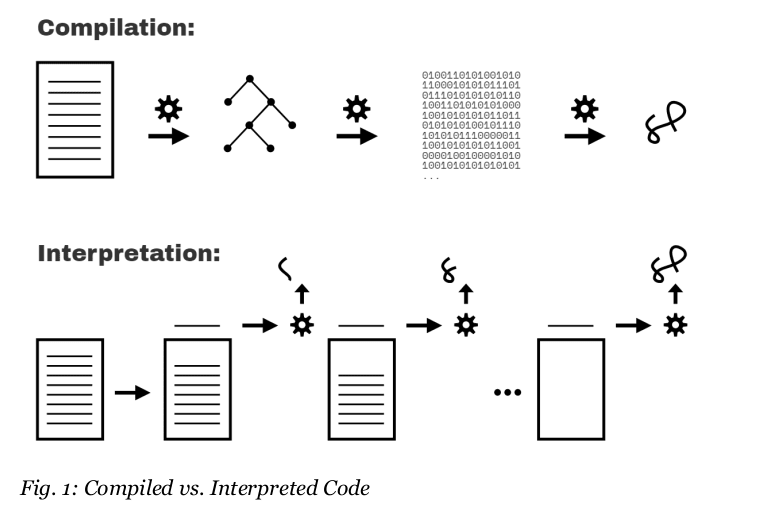 Let’s now learn about the compilation of a program:

Breaking up a string of characters into meaningful (to the language) chunks, called tokens. For eg:

This program would likely be broken up into the following tokens: var , a , = , 2 , and ;. Whitespace may or may not be persisted as a token, depending on whether it’s meaningful or not.

Parsing is the process of taking a stream of tokens and turning it into a tree of nested elements, called the Abstract Syntax Tree or AST.

Code generation involves taking an AST and turning it into executable code. This part varies greatly depending on the language, the platform it’s targeting, and other factors.

NOTE: The implementation details of a JS engine (utilizing system memory resources, etc.) are much deeper than we will dig here. We’ll keep our focus on the observable behavior of our programs and let the JS engine manage those deeper system-level abstractions.

Syntax Errors from the Start

This statement assigns a value to student for each element of the array students.

Here, the argument 73 is assigned to the parameter studentID.

The last target reference in the program is:

A function declaration is a special case of a target reference. Here the identifier getStudentName is assigned a function as a value.

So, we have identified all the targets in the program, let’s now identify the sources!

Here the student is a target but the array students is a source reference.

In this statement, both the student and studentID are source references.

student is also a source reference in the return statement.

NOTE: In case you were wondering, id, name, and log are all properties, not variable references.

NOTE: At all costs, avoid eval(..) (at least, eval(..) creating declarations) and with. Again, neither of these cheats is available in strict-mode, so if you just use strict-mode (you should!) then the temptation goes away!

NOTE: It’s important to note that compilation doesn’t do anything in terms of reserving memory for scopes and variables.